A big challenge for trans folks, one we don’t always talk about, is allies who try to be supportive of us but end up being transphobic or hurtful with how they talk about our community. Here are some examples of sneaky transphobia and why you shouldn't say them.

Being transgender can be a big challenge, not just within ourselves but from those around us. Of course, there are some people in the world who have outright hostility toward us, but usually, we see those people coming. They don’t try to hide how they feel, and they’re eager to let us know it.

But another challenge, one we don’t always talk about, is the challenge of allies who try to be supportive but end up being somewhat transphobic.

These are well-meaning people who think that they’re helping and think that they are very accepting of “this trans thing,” but in the end, they often say things out of ignorance or lack of understanding that harm us more than they help us. Some of these comments have even come from within the trans community itself, which proves that just being trans is no guarantee of being inclusive to all trans people.

Here are four things that true allies of the transgender community should not say, and why.

1. “Real” trans people are either male-to-female or female-to-male.

Under the umbrella of transgender, you can find genderqueer, gender fluid, agender and other identities, not just male and female. Every identity is valid. Gender is not a binary; it is a spectrum, and people can fall anywhere on the spectrum. Trans pretty much just means identifying as a different gender from what was assigned to you at birth, and that identity doesn’t have to be just male or female.

2. If you were trans, you would have dysphoria.

Many transgender people have dysphoria (discomfort or distress that their physical body doesn’t match the gender they identify with), but others do not. Just because a trans person doesn’t hate or dislike the body they’re in doesn’t make them any less trans. In my case, I have a body and I’m a guy, so therefore, it’s a guy’s body. The particulars of my anatomy don’t define me, and I don’t have to be super unhappy with my body to be trans. Those who have dysphoria are valid, and those who don’t are valid. Simple as that.

3. I’m okay with people transitioning because transgender is a mental illness and that’s how you treat it.

Being trans used to be mistakenly seen as a mental illness or disorder, but not anymore. The American Psychological Association does not consider being transgender a disorder because a disorder requires “significant distress or disability.” Trans people do sometimes experience gender dysphoria, but in that case, the dysphoria is the problem, not the state of being trans. How other people treat trans people can also contribute to suffering; a study published in The Lancet Psychiatry last year showed that the mental distress felt by many trans people was actually not from being trans, but from how society treated them for being trans. A similar study published by the American Academy of Pediatrics found that socially-transitioned young people with supportive families had rates of anxiety and depression that were about the same as cisgender kids, again suggesting that mental struggles felt by trans people stem in large part from the world around them, not from within themselves. So no, being trans is not a mental illness.

That said, these studies do show that supporting trans adults and youth through whatever transition they choose to make is the best way to minimize any mental or emotional struggles they might have. While being trans isn’t a mental illness, allowing people to transition the way that they feel is right for them does create the most positive outcomes for trans people.

4. If you don’t try to “pass” well enough as your preferred gender, you must not really be trans.

Not every trans person can pass as, or be perceived as, a different gender than what they were assigned at birth. But more importantly, they don’t have to, even though some members of society think they do. There are a variety of reasons why someone may not pass: they could be closeted for their own safety (they may have unsupportive family members or a hostile workplace), they may not have the resources to buy new clothes or receive transitional medical care, or they may simply be perfectly comfortable in their own skin as they are. Again, all of those are valid. We assign gender to things that don’t actually have gender, like makeup and skirts (both assumed to be female), but in reality, anyone can wear makeup, anyone can wear skirts, and any trans person can present themselves to the world in any way they choose to. A trans guy is no less a guy for having long hair or wearing lipstick – and the same goes for cis guys, of course! Being trans is one’s identity, and the expression of that identity is a personal choice. Trying to “pass” is not a requirement for being transgender.

So, how can people be good allies to transgender adults and youth?

Help to educate others while supporting trans people just as they are. Contribute to supportive charities, like Point of Pride! If you want to get involved politically, you can contact your Congressional Representatives, Senators and the office of the President and tell them that you support equal treatment and fairness for transgender Americans.

Together, we can raise trans visibility, increase education and eradicate sneaky transphobia! 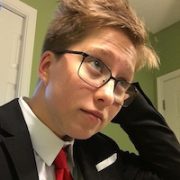 Drew is a 17-year-old trans guy who lives in Ponte Vedra, Florida. He’s an honors student and an outspoken advocate for LGBTQ equality who volunteered with a variety of local and national LGBTQ rights groups.

The History of the Transgender Flag

A Trans Guy Walks into a Gay Bar…

The Definitive Guide to Pronouns